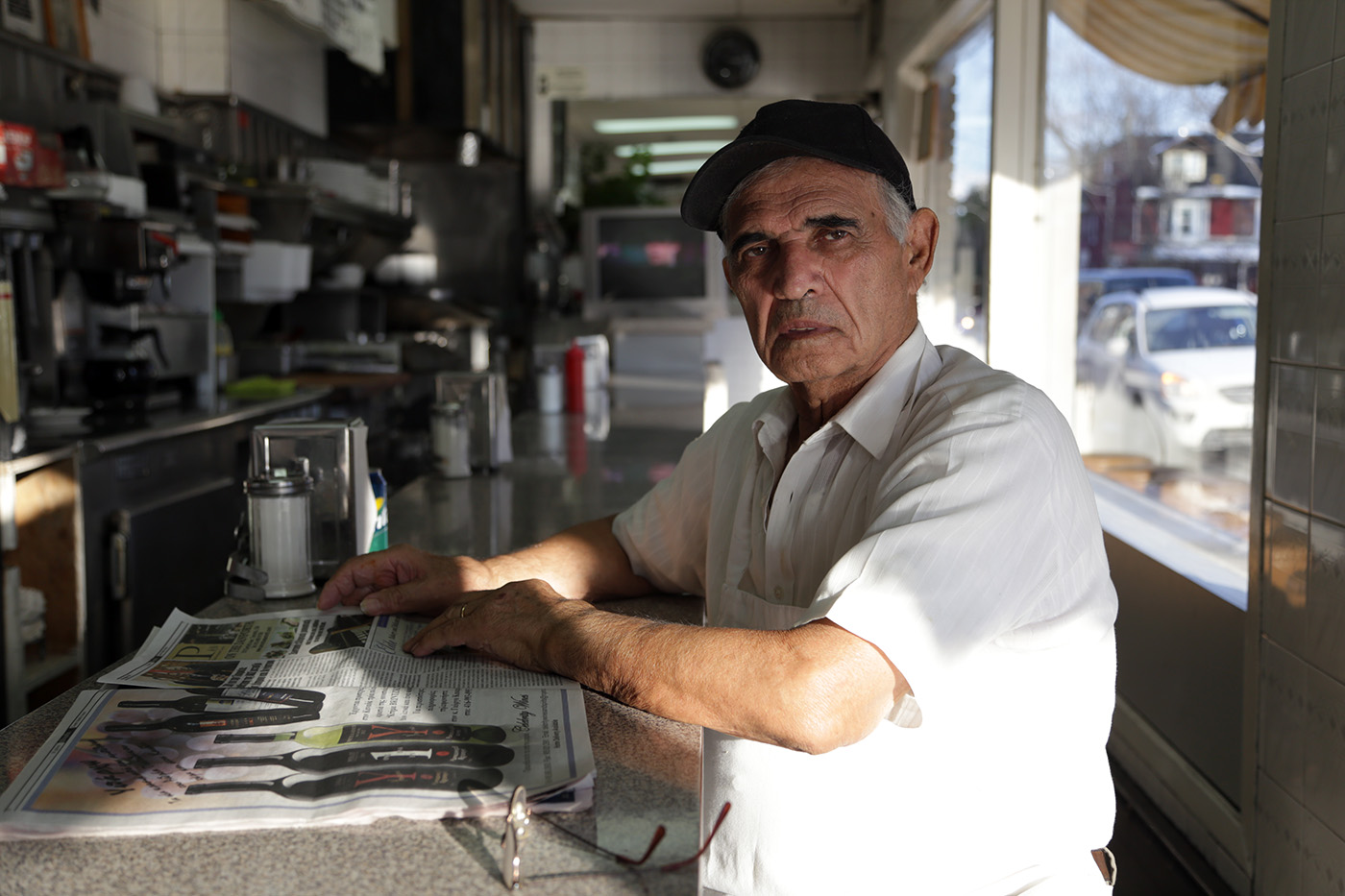 I came to Canada in 1962, with another woman, another girlfriend What do you want me to say? All the story? I come to Canada in 1962 and I worked here at Landsdowne and Dupont. After three years I made my own business at Eglinton. And after that I’m back again to High Park and Dundas – another restaurant with another woman, another girlfriend. That’s it. It’s enough. I don’t need a story. You know the story for Toronto. 1962, I come to Canada and I go to Landsdowne and Dupont and after that I made a business at Eglinton. Toronto was a big village, nothing to do, no big buildings, no nothing. The big buildings were the Royal Hotel, and at Bay and Wellesley The Ford Hotel, 7 floors, that’s all. And after that, they made the Bank of Montreal down Front Street. All the stores…nothing. Nothing. No business. Across the street was a supermarket, down the corner. After that, a milk/bread company turned into Loblaws at Christie and Dupont and after that Canadian businesses came, Tim Hortons, Canadian Tire – all the big stores were American businesses. Why not make Canadian businesses? Canadian people had money but they’re scared. It’s a very, very bad time for business and a hard time to find a job because starting here they are Prime Ministers. After ’65, the Prime Minister Trudeau came in. Trudeau opened up a little bit businesses. They ask him for a job and they say okay, but before they would write your name down and never call you – nothing for business. It’s very tough; it was a very hard time to find a job. I worked for 85 cents here at Landsdowne and Dupont. You know General Electric? Now it’s closed. 85 cents! How much money you wanna make? I paid $90 for a flat and I made $33 a week. I needed three weeks to work for rent and $30 for food, for a ticket, for coffee. And they say Canada makes money. Fxxx off Canada makes money! You know the people who make money? People who steal something. They steal for the car, for the fire for their home, for that… You know insurance? They give the money. All the people, 75% of the people at Brick make their money through insurance. You push one guy to push a car, to drive it down, and you make $158,000 and you split it 50/50. That’s a crook business. If you work for good money, ‘sir, yes, sir,’ sometimes they say: “Thank you very much,” sometimes they say: “Fxxx off.” Business is very tough.